Part of Saturday’s excitement
was centered around people that I got to meet or see at the event.

I have connected or re-connected with many people on Facebook.
Several were part of the triathlon Saturday morning.

This is Tanna.  She and I went to college together almost thirty years ago.  She saw me swimming at the aquatic center several weeks ago and recognized me!!!!  But, she didn’t think it could truly be me, so she went home to look me up on FB rather than speak to me there in the water.  She found that we did actually live in the same city, so she messaged me.   We wrote back and forth several times and then she spotted me at the event.  It was great to get to see her again.

Then there was Jennifer.  She was George Dodgen’s best friend growing up.  They were more like siblings than friends.  Jennifer found my slide show by googling George’s name after his untimely death and she wrote me a note through my blog comments.  Later, we became FB friends. I knew she did races, but didn’t know she’d be there Saturday.  She saw me at the event and introduced herself.  It was wonderful to actually get to meet her in person.

A really neat twist to our story is that she found a cousin on FB recently … and saw my picture with her cousin.  It turns out that her first cousin is one of my best, best friend’s Cyndi!  Their dads are brothers.  Cyndi and Jennifer grew up in the panhandle of Florida.  Jennifer now lives here.  I met Cyndi when we lived in Valdosta about ten years ago, but now she lives in Tennessee.  Wow.  Now, that was a surprise… and another reminder that we live in a very, small world. 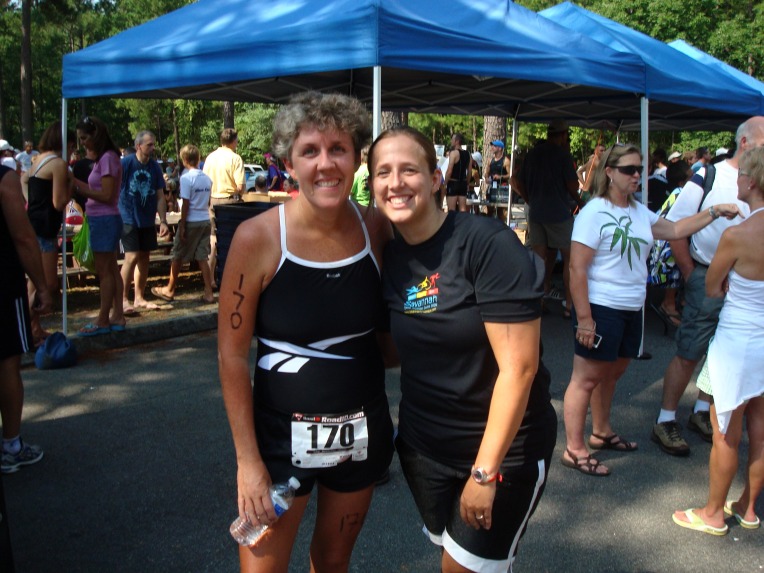 So, Saturday’s event involved more than swimming, biking and running.  It involved reconnecting with old friends and getting to meet some new ones.

I’ve said it before, but I just love Facebook.  I have to be careful that I don’t spend too much time there.  But, the time that I do spend there is enjoyable and often brings great surprises.

Even tiny creatures can create beautiful art.
Life with a puppy in the house; it is common to find pig parts (hooves and ears), unstuffed animals that once resembled live ones and big sticks littering the floor. The stuffed, squeaky wart hog that is the absolute favorite is not currently in the frame.