One at a time, we are taking care of things around our home that have needed attention for quite some time.

God has been so gracious to keep our hot water heater operating and leak-free for quite some time.  I knew it was only a matter of time before we would have to replace it.  And the time finally came.

Last week, I began to notice a slow dribble of water that was running down the side of the heater that began a little puddle on the floor.  We knew we only had a few days, at the most, before we would have wet carpet and be in a danger zone.

I did some price comparing and made a few phone calls for help.  Ryan and his wonderful dad came to the rescue for us!!

I know working on anything with a gas line can be daunting, but, Ryan and Kelvin weren’t at all put off by the job.  In fact, start to finish, it probably would have taken them less than an hour ….. had they not had to exchange the water heater that I bought the previous day.  You purchase it “still in the box.”  When we began to take away packaging,  it looked like it had been dropped at some point along the way. 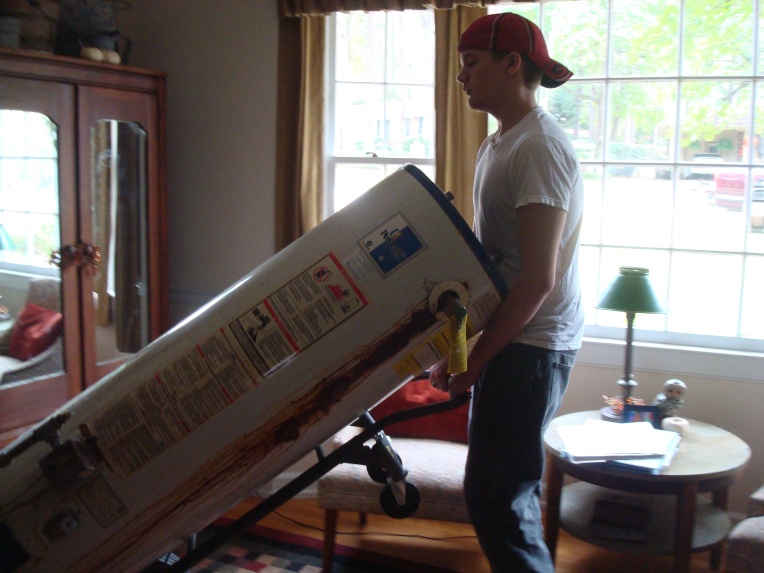 I thanked them profusely …

before they did the job …

We fed them pizza for lunch.

And I made them a thank you card…

and included a gift certificate for a local restaurant.

I texted them thank you several times afterward.

I don’t really know of any other way I could have thanked them.

But I don’t think they understood

just how much it meant to me.

They were happy to help us.

And they did the job quickly.

I will remain grateful … honestly?  For years. Truly. No. I’m serious.

And see those two knobs at the top?  Ryan’s dad was even happy to go the extra mile for me.  I wanted to be able to control the water going into the water heater and leaving it.

See, we have a “ten minute shower” rule here.  I just don’t see any reason to spend more than ten minutes in the shower. It’s wasteful of water and gas to stay longer than that.  Really!  How long could it possibly take to wash a body?  There are millions of people in this world who would love to have a two minute warm shower!  There is no need for us to waste something just because we have access to it.

So, I want to be able to turn off the hot water at the heater when I have a shower lingerer!  Of course, they get a ten-minute warning with a knock on the door.  But, if you don’t heed the warning, you’re close to goosebumps!!  It was such a blessing to have this knob added to our equipment.

And so, I’m grateful.  I’m thankful for a hot water heater that was installed with ease by men that were happy to help us.  I’m thankful for two knobs, rather than one, to control water flow.  And I’m thankful that the job is behind us, not looming in front, with us wondering when and how messily the breakdown will be.

Yes, I’m grateful.  And I really don’t think they understand.

Thank you, Ryan and Kelvin. You blessed us deeply.