I spent several days last week with Stone. He had a Christmas party at his home on Thursday. He was a bit overwhelmed with the addition of preparing for and hosting a party on top of regular life, so I offered to step in with my help of manual labor. I drove over on Wednesday evening so that I had the entire day Thursday to clean. I love community projects. I’ve had friends come over to help me clean or paint or move. I know how much it means to have another pair of arms and legs help on any project.  Sometimes I wonder if I’m not Amish at heart ; the thought of barn raisings or quilting bees makes me warm inside. I was excited to be able to help Stone.

The timing was such that his party fell just before the North Atlanta Rock and Gem Trade Show. Just a few years ago, Joy and I attended a similar show here in Augusta.We spent two or three hours purusing the tables, asking questions and exploring the interesting examples of God’s handiwork in gems and fossils. This beautiful ammonite (an ancient relative of the modern day Nautilus) sits on a collection shelf in our home, a treasure that we brought home for that show.

When Stone invited me to attend the show in Atlanta with him … I was … beside myself with excitement. To think that I would be attending a show with my own personal guide was … well … thrilling, to say the least. Stone’s teacher’s heart alongside my inquisitive, ever-questioning spirit would make a super match … well, for ME anyway!!

With rows and rows of tables and booths
pretties that sparkled and tinkled
and fossils with stories of old,
we spent four full hours meandering and investigating.
As the end of the show drew close, we had to move a bit faster.
I am certain we could have spent at least another two or more hours,
had we had the time to linger longer. 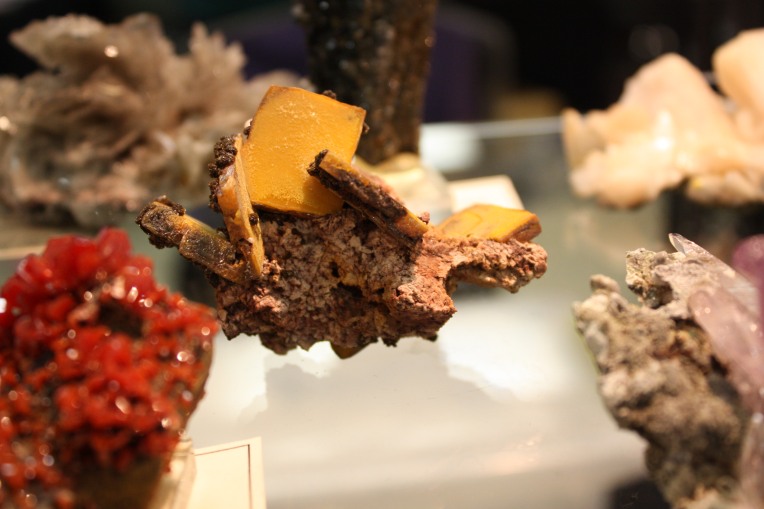 Before we arrived, Stone suggested that I keep my eyes open for a pair of earrings or a necklace that I admired. He offered to buy them for me as a Christmas gift. I searched throughout our visit, but only saw two little bracelets (bracelets that I would add to the string that I wear daily)  that I really wanted to wear out of the show. As we neared the end of the afternoon, Stone asked, “Is there anything here that you’d love to have?”

I shared with him that there was something I was contemplating buying …. but just couldn’t decide if I could justify the amount of money that it cost. He queried for more information.

I took him by the hand and led him back to Stones and Bones table.

You know everything that lives … has to breathe, grow, eat and poop … right? Has it ever occured to you that a dinosaur that left behind footprints … 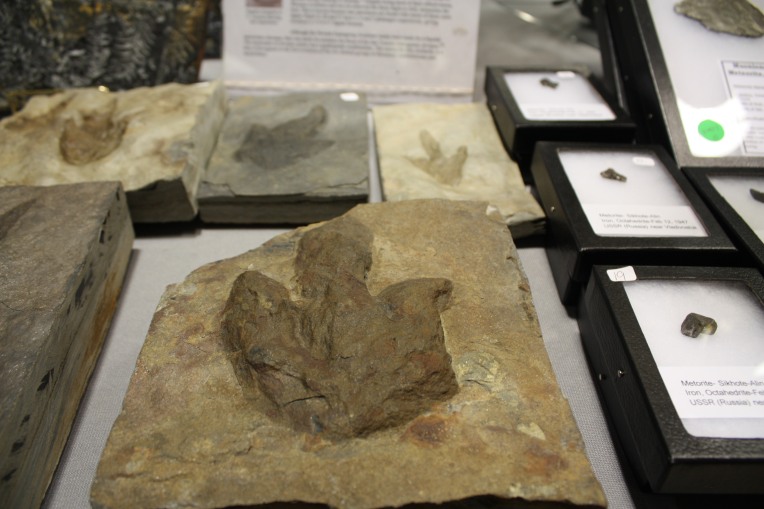 might also leave behind poop? … that could turn into a fossil? …. a fossil, that when cut in half, could be polished
and stunningly beautiful? 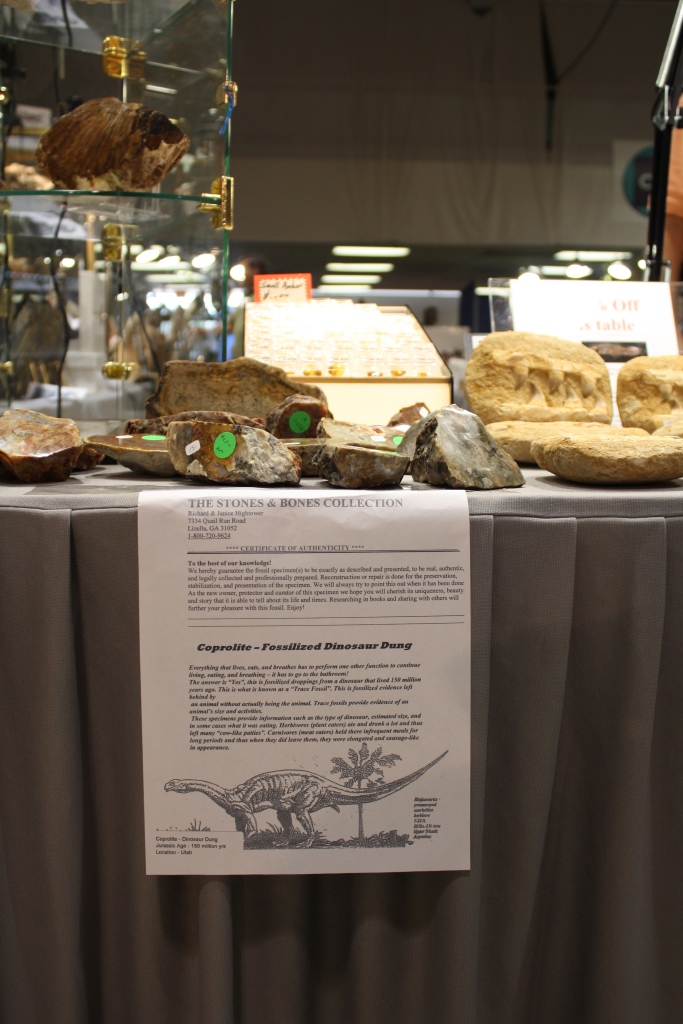 There I stood beside this table of fossils and bones … explaining to my geologist boyfriend
that I really wanted a piece of coprolite.
He was quick to laugh at me and tell me that he couldn’t possibly buy me dinosaur dung for Christmas!!
“What will your friends think? What will Della say?”
But, who decides what is a gift and what is not? If we give a gift to please someone ….
if we desire to offer something that is exactly what the recipient wants …
then why in the world should the gift be limited to that which is
“socially acceptable” by all standards
rather than simply desired by the beneficiary?

I assured him that this was something that I wanted … no matter how silly it might seem to others. 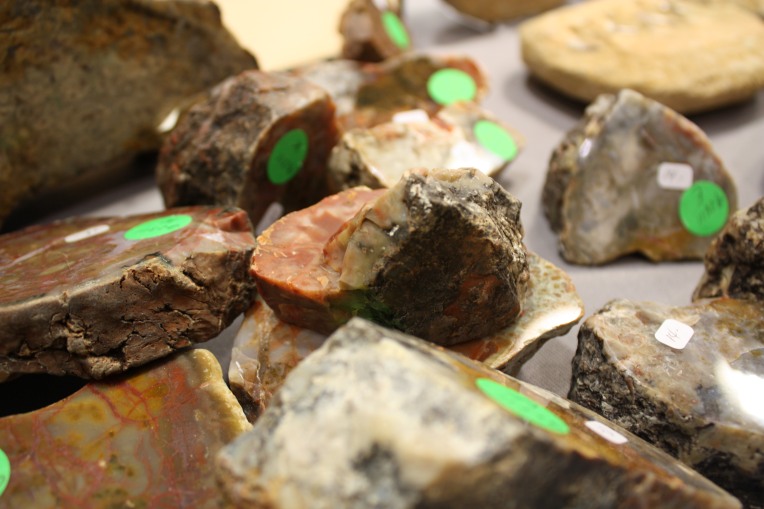 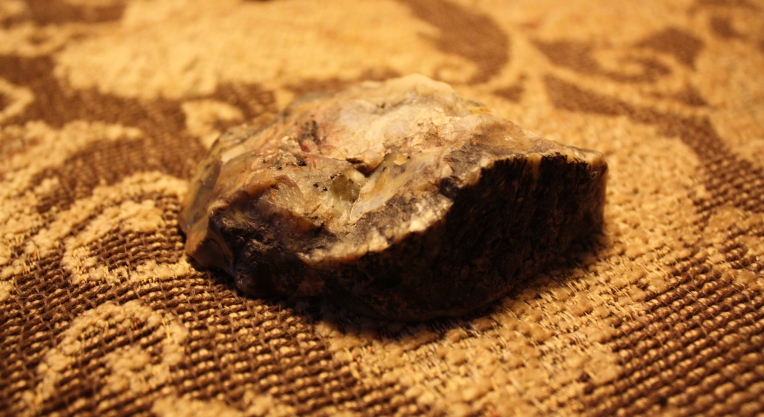 I’ve already showed my gift to at least a half dozen people including my friend, Carin, as we supped on coffee at Starbucks yesterday morning and Jason at the Apple Store in the mall. I took my present with me to show Carin because I knew she would appreciate  … NOT the present itself … but how much the present means to ME! She gets it … and she was so thrilled for me. She tells me time and again, “When you talk about Stone, you glow!”  I feel that is true. He is a gift to me … a gift for which I am grateful.After Starbucks, I went to the Apple Store to purchase a cover for my Macbook and ended up in conversation about rocks with the store Genius. Turns out Jason is a fossil hound and rock collector, too. As he rang up my purchase, I ran out to my van to retrieve my prize so I could show it to him. I just don’t care how silly I look …. why not share excitement about life with others? Right?

Yes, the topic even came up at Aerie in the mall as I chose new lingerie … and with the sweet cashier at Williams and Sonoma as I picked out a wonderful gift for Stone’s dining table. Can you tell I’m tickled? I’m sure Stone will give me another gift … something that doesn’t sound as ridiculous as dinosaur poop …..
but … really …. is there something that would be quite as neat and fascinating to me?
Coprolite will be really hard to beat!!
So, as silly as it sounds, my boyfriend gave me #%@& for Christmas.
And I couldn’t be more happy.

I still remember when Ellen told me the story of a man who was watching her work. He commented that she didn’t look like she knew what she was doing. She retorted, “Well, that never stopped me before.” Ellen has always been someone with spunk and an inner strength to protect herself that I do not come by naturally. Through the years of friendship, God used her to change me in many ways. In years’ past, I would never have considered taking apart my trailer to figure out why my lights don’t work properly. But now? Now I’m going to rewire the entire trailer by myself and build new walls that will support a cover so that I can carry my two kayaks safely. While I have it taken apart, I’m going to paint it. It took observing courage in others for me to muster mine. It took me seeing those who don’t care about the opinions of bystanders for me to value mine. So here I am… taking something apart and not being exactly sure how it all goes back together… But I will figure it out and feel great sense of accomplishment once I’m finished. I share this to encourage you. Don’t let “not knowing how” stop you from trying. Do something you’ve never done. Do it scared… Just do it. #YouCanDoHardThings
I spent some time this afternoon in my shop. Rather than a guard dog, I was blessed with the company of Reid, the Large In Charge Llama. @maisiedazefleecery