Joy and I realized last night
that both of us have “hair inspiration”
from photos that we saw on girls on  Instagram.

If there is one thing that I know about body altering,
it is that
with every change, there is a desire to try something new.
I’ve heard it said that tattoos are addictive; once you get one, you want another.

I praise God that there is a law that keeps me from allowing the girl to get a tattoo.
At least THAT is one decision that is made for me by the government!
But, all the other things she’s asking for …
are legally permissible.

We sat down to a bowl of Beef, Mushroom and Barley soup
and talked about these things …. again. 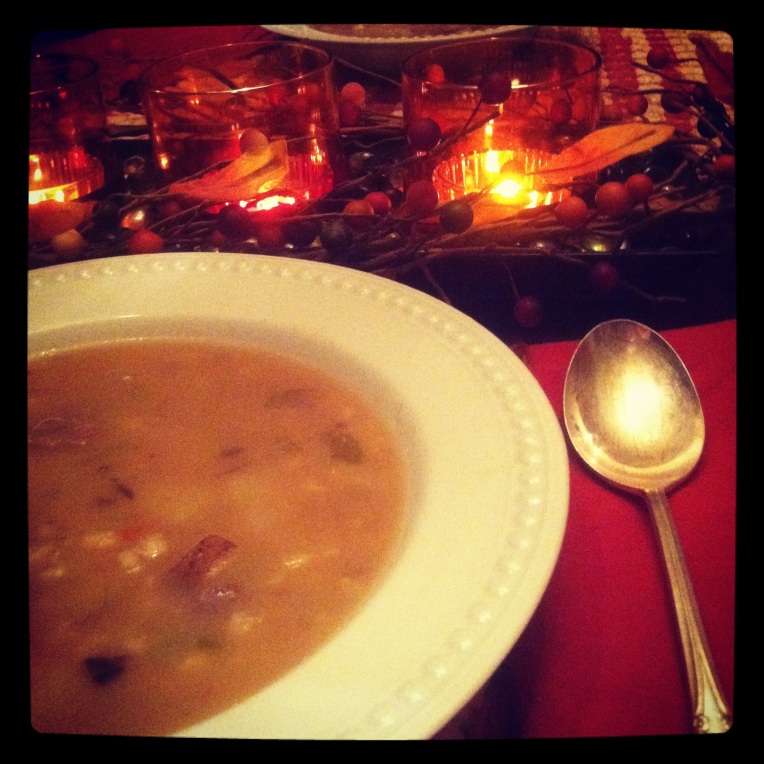 She has asked to do some kinda crazy stuff to her hair lately.
She wants to let her hair grow out and dread it.
After it’s dreaded, she wants to bleach it and dip the tips into different colors of dye.
She wants to color it in stripes, high light it, low light it or color it red.
She would love to gauge her ears, or pierce her ear cartilage, her nose or her tragus.
She wears some pretty push-the-limits outfits.
They’re not immodest (I draw another line there),
but she’s perfectly comfortable mixing patterns and styles.

The thing is, I’m not willing to allow her take these steps
because she’s only 13. She has some older friends who have these type decorations,
but I’m of the mindset that, if she starts now, she’ll push farther and farther.
So, I’ve told her when she’s 18, she can do all of these things …
but not before.

Part of this is rooted in a culture today that accepts more of these type things.
But, I think it’s even more deeply rooted in the fact that
Joy goes to a creative, push-the-limits arts school.
To be in the school, you are naturally an “outside the box” thinker.
You pay attention to trend – and you make your own, as well!

The struggle comes in the balance. Right now, I’m the boundary keeper.
It’s a difficult job. I want her to express herself. But, I don’t want her to push the boundaries too far
when she’s still so young. Sometimes, as we grow and mature, we regret past decisions.
I don’t want her to make decisions that she later regrets and turns to me to ask,
“Mom, WHY did you let me do that?”

So, last night, we used an IG photo as our inspiration and took scissors to the girl’s hairs.
I love the finished product.
And I love that a haircut can be so amazing
on a stylish, opinionated, boundary-pushing girl!

I love everything about this girl!!

2 thoughts on “We cut her hairs”