Several years ago, I began choosing a word for my year. I love reading stories of other bloggers’ lives …. their focus … their intent for the year. Here, Dawn shared that she wanted to FLOURISH in 2013!! What a lovely word! I can’t even picture the word in print without clean, lean brushstrokes. And Rebecca Sower wanted to GIVE.  She used her thread and needle to create an image to hang in my memory. This is a fabulous post by Mary who wants to Rewrite the upcoming year.

In 2011, my word was Fellowship. I wrote about it here.  I chose a words for 2012 and 2013, but
honestly
I’ve struggled with vulnerability
and have not been brave enough to write about my Words in detail.
But, I thought I would share a little bit today.

There are many reasons to set goals and many reasons to avoid them. I think personality has a great deal to do with whether setting them is healthy for you or not. If you’re more of a perfectionist and you want to get things “right,” (whatever THAT means!), you may be one who is better on focusing on a word for the year
rather than a list of “things to do.”
But, if you’re really laid back, specific goals might be helpful.

I spoke with a friend the other day that set 60 goals for this past year. I was amazed!! 60 goals sounds lofty to me!! As we talked, I noticed that the goals that she set that were measurable (like lose a specific amount of weight and save a specific amount of money) were not reached …. BUT, she was REALLY close, had made progress and could count that progress. A number of her goals were not as “measurable” …  like “be more happy.” The problem with vague goals is that there is  no way to truly measure your success and you are then left to emotions when “counting time” arrives (the end of the year).

Last year, I wrote a little bit about my word  (here  “A year of …..”   ) …. but didn’t follow up. It took me  a few months to really know that I had chosen the right word.  Last year, my word for the year was FEAR. When I shared the word with a friend, she said, “Why don’t you use the word “courage.” And I had already thought the same thought. But, courage is such a broad word. For me, it wasn’t about being brave and courageous all over my life, it was about facing some very specific fears.

I began to think about fear as the days went by and I realized that, for the most part, I’m not a fearful person. In fact, my fears are very specific. I am afraid of physical injury, especially from a fall (like the roof) or from traveling very fast and losing control (like on my bike, on skis or as skateboard). And I am afraid of what people think … more specifically, what men think … and most specifically, men whom I care deeply about.

And honestly, it was a really good year. I looked fear in the face. I listened to my words and noticed when I used the phrase, “I’m afraid.” I considered what I was afraid of and whether it was a good thing to fear.

In fact, I’ve considered focusing on fear for another year, but I think that I have exposed enough of it that I am now in the practice of looking at it, calling it what it is and facing it. It’s a very good thing and I think I will carry this with me as I move on to another focus.

Fear was a second step after my focus word for 2011. 2011 was a slow year for my word coming, as well. It was in February or March of that year that I realized how deeply I allow others to influence my actions (again, specifically: men).  It was in 2011 that I chose the word “Disengage.”  I decided to begin to truly push back when I felt the nudge to do something because someone else wanted me to do it rather than doing it because it was something that I wanted to do it. I began to become fully aware of how often my decisions are based almost fully on whether they will make a man in my life upset or pleased.

It was when I was talking to my brave, encouraging friend, Della, that I realized just how far I have come. Some time ago, I found myself telling her the story of my getting dressed. As I pulled my socks up over my calves, I thought about a particular man who wouldn’t like my sock and shoe choice. She asked, “Did you wear them anyway?” I confessed that I did. She said, “Well, good for you. I remember a time not so long ago when you would have changed your mind and changed your socks and shoes. You are making progress.” I hadn’t thought of it that way. And she was right.

So, after a year of disengaging
and a year of facing fear,
I am ready to “plan.”

I see that when I don’t PLAN for action, I don’t act.
I do the things that have to be done.
I pay bills. I cook and wash dishes. I clean and vacuum.
But, when I don’t make a decision to paint, sew or create ….

when I don’t carve out time to read my Bible (like I used to) ….
when I don’t make myself exercise because I have made the decision to do that ….
I don’t “act.”
And it makes sense.  Without a plan, there is no follow through.

While I use my calendar well and often, 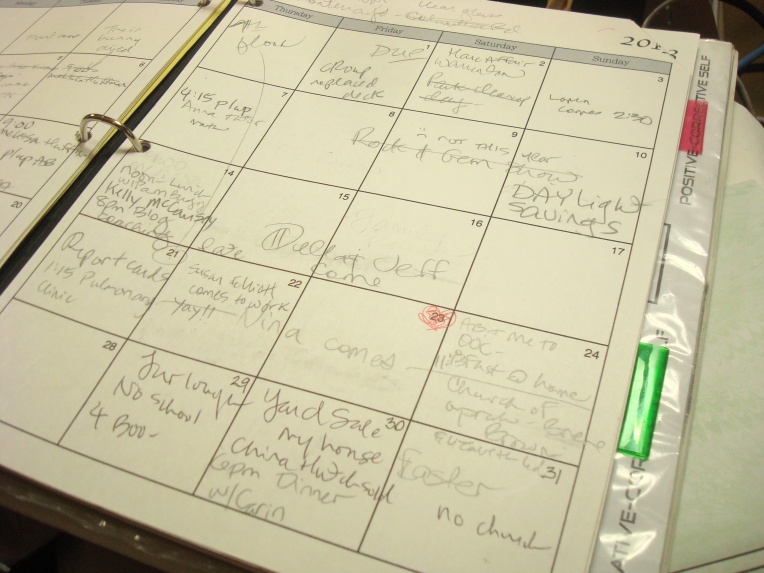 there are so many planning devices

that sit idle in my world right now.
I think it’s time to do a little better in this area. 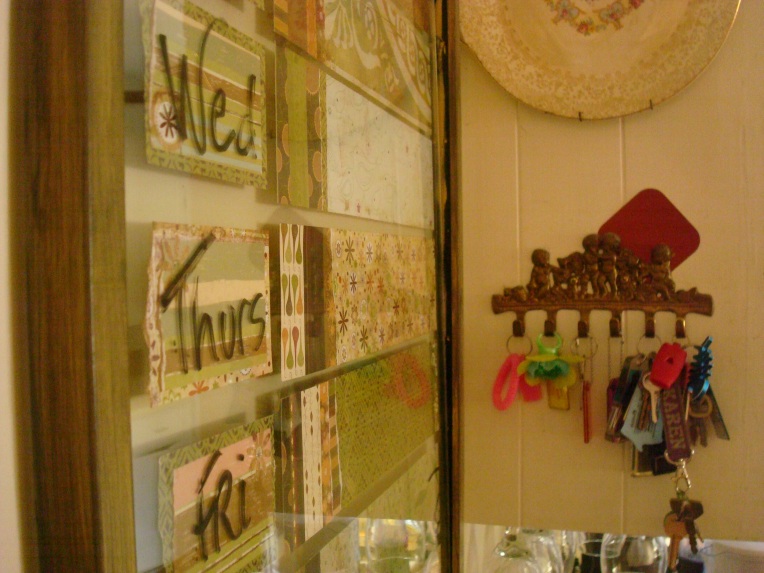 In a way, “plan” sounds very goal oriented … but it’s more of a focus on my actions. I want to think ahead and carve out time to do the things that I say and think are important … but that I allow myself to get away with NOT doing. I want to think ahead for the week and plan for activities, rather than just letting life happen.

I plan to figure out some sort of plan for making some of my dreams
become a reality.
This past year was full of beautiful, exciting changes.
I’m praying that next year brings more of the same.
I think, by focusing on planning, I will be able to see those dreams come to fruition.