Do you remember when you were little when adults did things that you didn’t understand? I never understood why my grandmother kept sugar, flour and meal in large, plastic containers in her pantry. I remember asking her about this  … probably more than once. And I remember that her answer was that she wanted to keep bugs out of them.

Until I had a pantry of my own and had a box of some-floury-sort-of-cooking-staple fill with little weevils and make babies and contaminate other boxes and bags way back in the back of my storage ….. I had no idea why plastic containers were a good idea. But, once I had to deep clean, cull and purge
and toss away good food,
those plastic containers in Carrie’s pantry made a lot more sense.

Today, I use glass rather than plastic, in my own pantry.

Not so long ago, Joy, one of my raisin haters saw my jar of raisins and said,
“Really, Mom? Why would you even WANT to put raisins in a jar?”

I laughed. She would rather be hungry than eat raisins.
THIS is why I want to keep my raisins fresh.
I love oatmeal with raisins, brown sugar and butter. 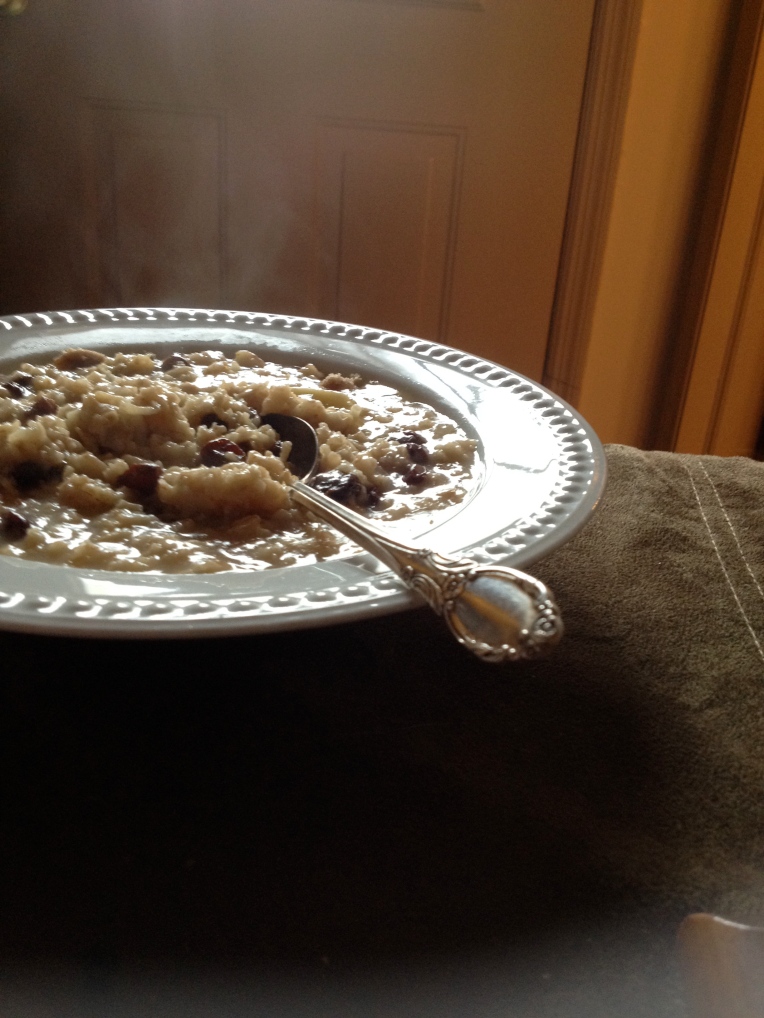 She won’t get the whole keeping-food-in-sealed-containers thing until
she is grown and has a few little mothy-bugs fly from her cabinet and she realizes that
she has to deep clean, cull and purge bugs from her pantry. But, her turn will come.

And, you know how hard it is to handle that last sliver of soap when your bar is almost gone?
Well, another thing that Carrie did that puzzled me
was she smashed that little soap sliver
into a new bar when she opened one.

I remember once washing my hands with a melding-bar
when the new fragment of soap wriggled loose.
I  …. g.u.e.s.s I tried to throw it away? I don’t remember.
I just remember that I was firmly instructed on how to make the old soap fragment
adhere to the new soap bar. I probably rolled my preteen eyes.
It seemed like …. a superfluous act to me. 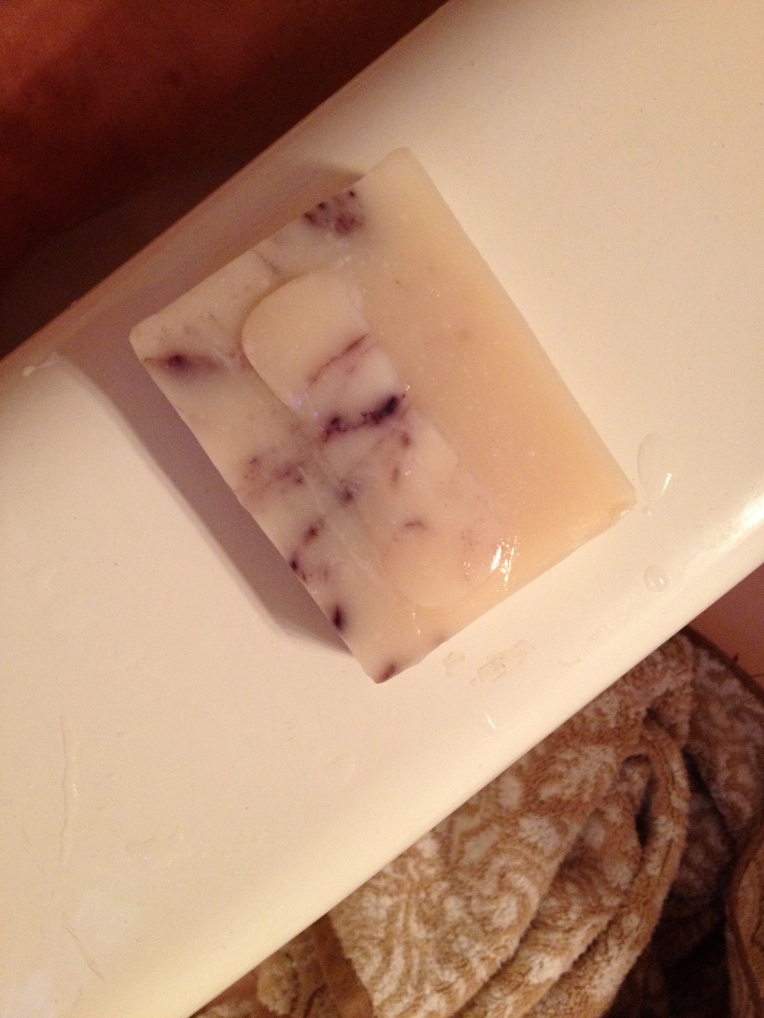 But, today, I am thankful. I mentioned HERE  that my skin is super-duper dry. The soap that I adored from Yardley is no longer carried at the grocery stores or pharmacies that I frequent so I have had to resort to a new product … which is also more expensive. More than ever, I am careful with ever last tidbit of soap.

My grandmother grew up in a time when there wasn’t excess. You cared for what you had and didn’t mindlessly toss things that cost money to purchase. She taught me many lessons on frugality.

In today’s world of consumerism, we cast aside things simply because we don’t like them or need them any more RATHER than donating them to an organization that can pass them along to someone who WOULD use them and want them. I am thankful that I was offered an example of frugal and careful.

On any given morning, you might find me eating oatmeal with delicious, fresh raisins
and then forcing the last sliver of soap from an old bar
into the clean, crisp form of a new bar
and giving thanks for lessons learned from Carrie.

Back in the early years of marriage, we had some friends who were adventurous, dear neighbors. They worked overseas but came home to our historic district to spend their summers working on their early 1900’s home. Those summer weeks seemed to fly by to me. I adored seeing Bea & Win come home and hated to bid them farewell.

I remember one particular conversation with Bea when she told the story of a friend of hers from her early years. She said that this woman would throw her kitchen towel over her shoulder as she worked in her kitchen. On her shoulder, it was handy. Bea said that she picked up that habit from watching this friend.

I had never seen anyone do this. Maybe this was a “Northern” habit? Or an “Old-timey” thing?  I remember that the story stuck to my ribs. I remember thinking about how others influence our habits and actions. And I still remember the sight of Bea with a towel thrown over her shoulder as she worked in her kitchen.

I can’t say that I have adopted this mannerism as my own, but on occasion
when the kitchen is busy
and there are many hands around,
I will throw a towel over my shoulder
so that I know that I have a clean towel ….
a towel who has a history that I know ….
not one that has been used to wipe up a smear of raw meat juice
or a puddle of spilled beverage off the floor without my knowledge.

And on those occasions that I find a towel over my shoulder, I remember Bea.

A kitchen habit that I do use from time to time
is a habit gleaned from my sweet grandmother, Odessa.
There are many sights and sounds I remember about my father’s childhood kitchen
and the things that happened there.
I remember that the water from her “tap” was hotter than water at anyone else’s house I knew. I knew it was hot enough to burn me. Yet she washed dishes bare-handed. I can still see that dishcloth circling those dishes …. bubbles swooshing and steam rising and her soft, gentle hands covered in tiny bubbles.  She had no dishwasher so feeding a family of four when we visited created more dishes than she was accustomed since she lived alone after my grandfather’s death when I was about ten years old. 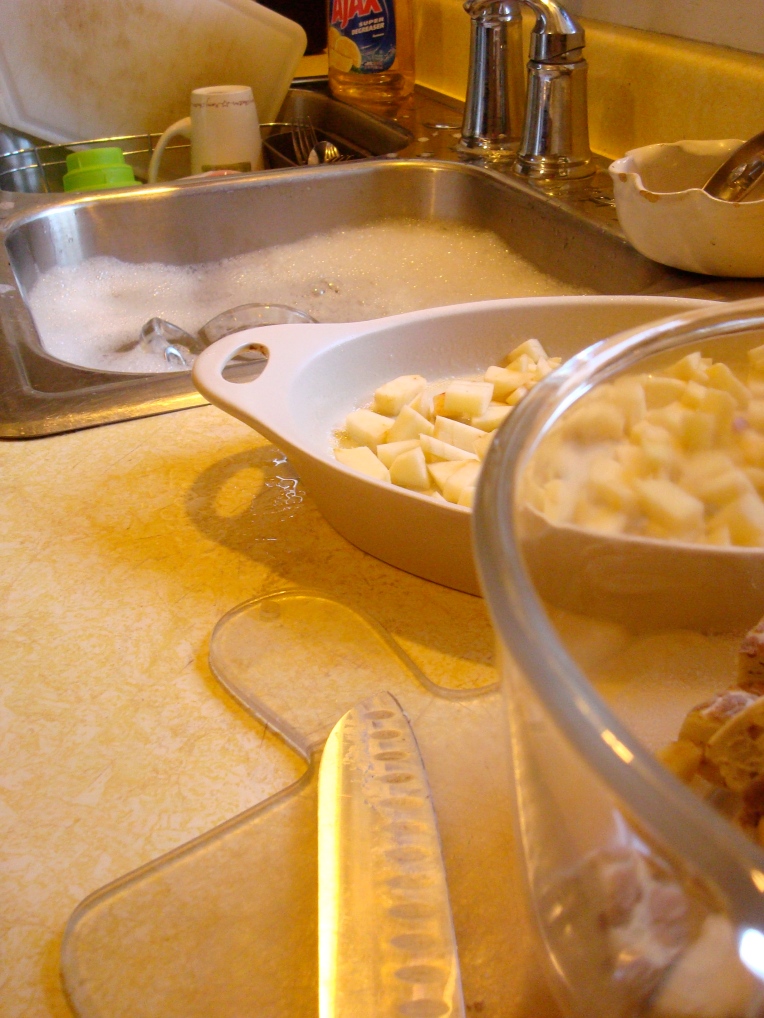 As she cooked, my sweet Mama would take a moment to put dirty utensils and dishes into the sink. As a few items accumulated, she would stop there a that sink and quickly wash and rinse. This kept her counters clear and made for a quicker clean up after dinner. 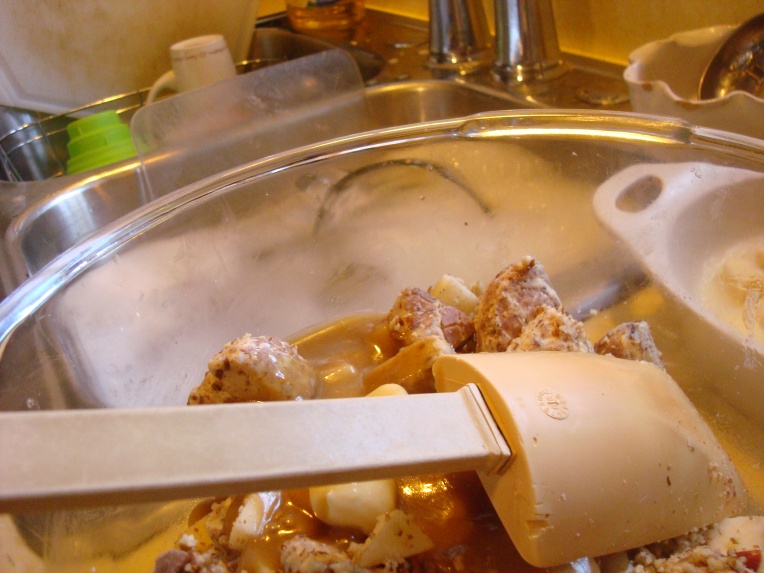 I don’t really remember if my own mother had this habit, but I remember it about Mama. When we would go to visit, I was always underfoot so I watched her closely.

We don’t have an operating dishwasher in my home right now. With four eating and drinking bodies in my kitchen, the counter fills quickly with dirty dishes. And when I begin to cook, I have a tendency to throw dirties right into that empty sink with a *clank.*  When I remember to fill the sink with hot water and keep the strainer on the left full rather than tossing metal and glass into the empty right side, cooking and after-dinner clean-up are much more expedient. Ahhhhhh …. but, therein lies the crux of the problem: I have to remember to fill the sink with hot water and intentionally wash as I cook. 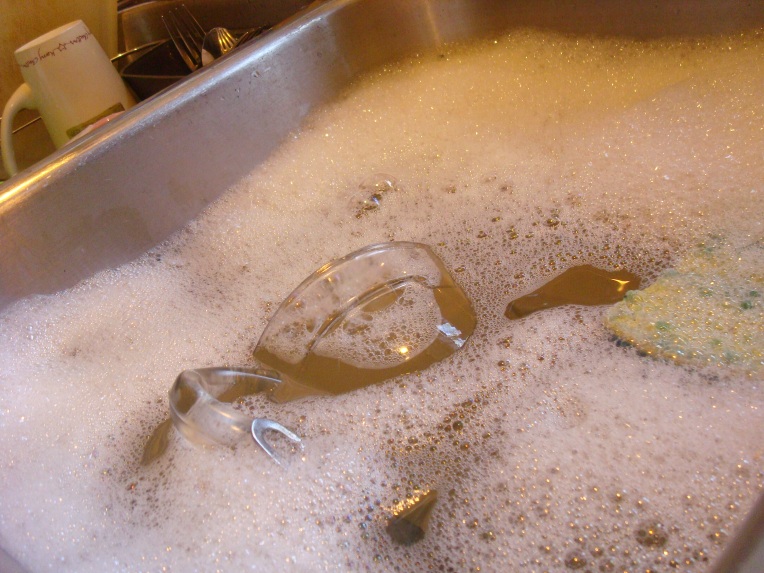 I would do well to remember Odessa’s sink. I would be wise to make it a life habit to cook in a kitchen that has a sink full of hot, soapy water.  I’m going to work on remembering this in the future. Sometimes I think about all the beautiful lessons that I learned from my sweet Mama. She was an exceptionally beautiful and talented soul.

What about you? Do you have a habit that you gleaned from a friend of family member that made an impression and that you still employ today?