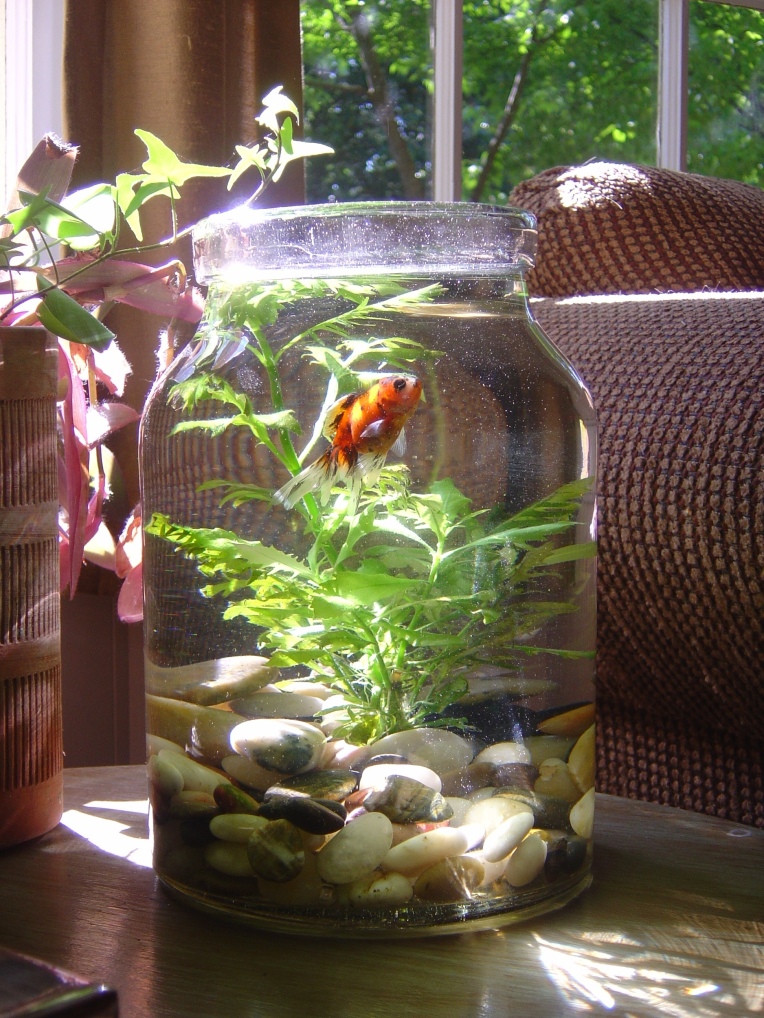 This is Abercrombie fish. I saw him in a pet store and immediately thought how cool it would be to have him in a jar in our house because he would MATCH our den. Yes. I really thought that.

I bought a live plant and added some awesome rocks to the bottom. The absolutely coolest thing ever began to happen in the late summer. The sun came in the window at JUST the right angle and caused the plant to … evidently make a lot of food because it began to give off oxygen bubbles…. a steady stream of them. It only happened for a few hours a morning. It only happened for about five or six weeks. But, those were SUCH exciting mornings. The kids and I would all go and watch…. even the big kids thought it was neat! I loved to watch our fish swim around in that healthy, yummy water being oxygenated by a fresh, live plant with real rocks underneath. This fish was a gentle reminder of how I am like that plant.  I’m a living being that grows and is healthy when I get into the position that I am right in line with the shining light of the “Son.”

Yep. Abercrombie and his awesome over-sized mason jar styled fish bowl with his healthy, green plant and beautiful, natural rocks really made me happy. What makes YOU happy this marvelous Monday morning?

*Note: This post has been shared on several sites. The fact that this jar is much too small for a fish of this type has been brought to my attention.  I had no idea at the time and my fish always seemed very healthy. He was moved to a much larger tank later.

As one of the commenters noted, a beta might be good for this type set up since they are most often placed in small containers, but I would recommend researching that before setting up a tank.

Also, If you just love the jar,  I have seen a very similar one recently (April 2015)  at a Kirkland’s store.

This link offers a tank cleaning tip that you may find helpful if you are a fish owner.

Thanks for stopping by and reading!

Shannon at Rocks in My Dryer is looking for general “tips” for her Works for Me Wednesday special. I have a great fish bowl cleaning tip!

We have a fish bowl and have had a large fish tank in the past. One of the hardest parts about cleaning a tank or bowl is getting the algae off the rocks or gravel in the bottom of the tank. My incredible, bright, inventive seventeen year old had a great idea that has been SO very helpful.

To clean the rocks/gravel quickly and thoroughly, she suggested wearing exfoliation gloves. They can be purchased inexpensively at any drugstore or in the Health & Beauty section at any superstore. 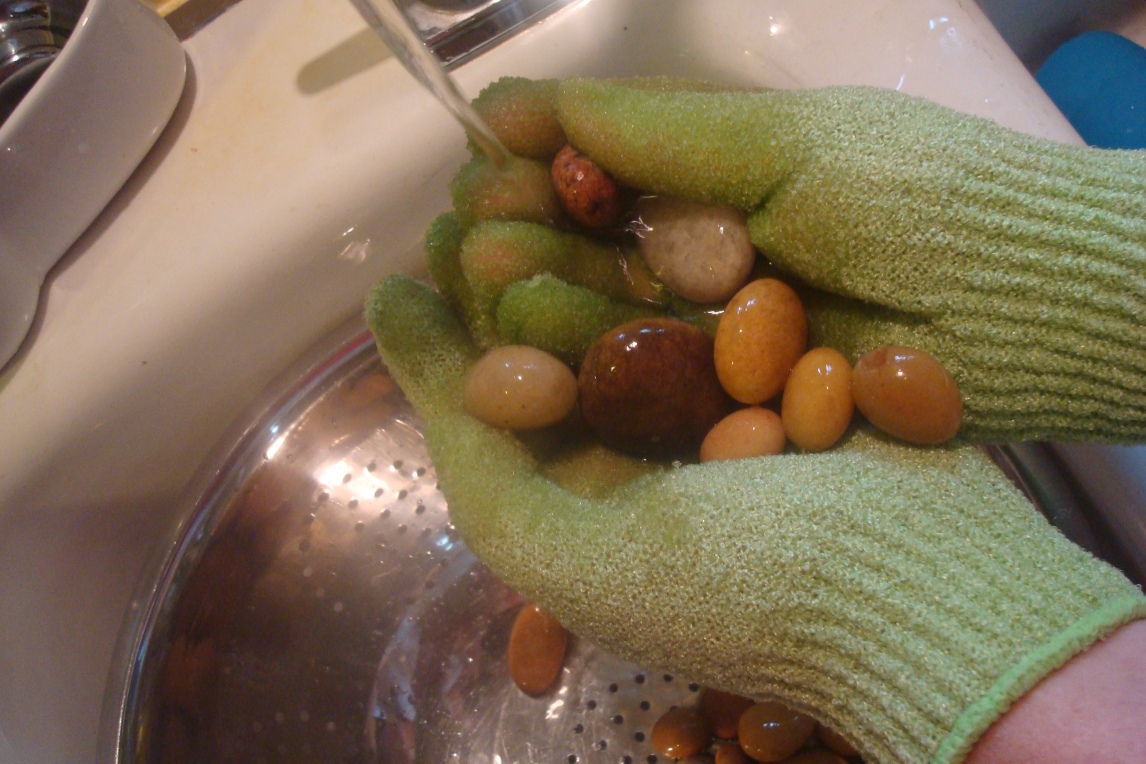 When I clean my entire bowl or tank, I put the fish with about 1/2 of the tank’s water into a container and set them aside. Then I pour gravel or rocks into a strainer. I rinse them and then use my hand covered gloves to rub the rocks clean.  This has made the stinky job of fish tank cleaning MUCH faster and my hands much more efficient as “tools” to clean the tank. Of course, I don’t do this really often because it isn’t necessary … but when the gravel gets really dirty, this has been a great help! It has made cleaning the tank much less arduous and I know it’s much more clean when I am finished.

After I get the rocks clean, I place them back in the bottom, add my fish and water and proceed with replacing the water that was removed with prepared, clean water.

If you’re a fish bowl or fish tank fan, I think you’ll find this tip helpful. Works for me!