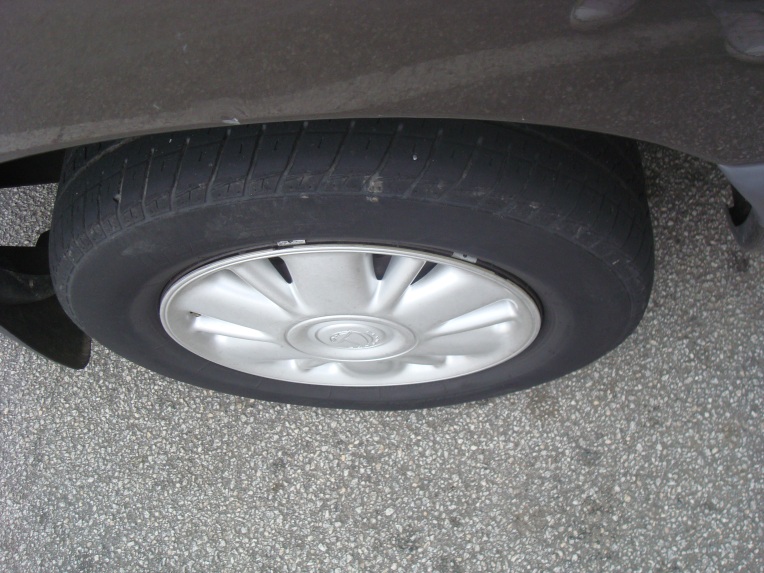 Over here, I wrote a post about stopping at a quick mart as I was heading out-of-town
only to spy a nail in the tire of my car (In the photo above … the nail is at about 1:00, if the tire was a clock face).

Not so long ago, a friend of mine shared a concept that a friend of his told him. His friend works at a tire store, so he has knowledge on the topic of tires and their common maladies.  He said that, more often than not, when you pick up a nail in your tire, it will become lodged in your  r.e.a.r tire.
Why? Because ….
while riding the road,
the front tire
travels over the nail
and KICKS IT UPRIGHT
so that it is perfectly positioned
for the rear tire
to roll across it,
thus impaling it into the rubber of your tire.

After my friend pointed out the propensity
for a nail to become a weapon to injure the rear tire,
I began to pay closer attention to the shrapnel alongside the road. 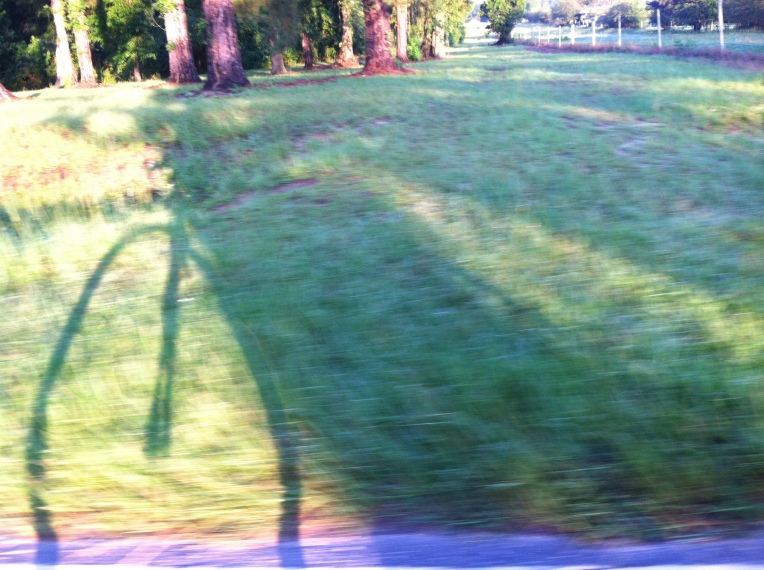 While I’m out riding my bike, there are times when I will stop to pick up a nail. I always think, “What if I were the next vehicle to ride by and catch that nasty booger in MY tire?” If it is close to the lane of the road, I will dismount and pick it up in hopes of saving someone the inconvenience of a flat at a later date. 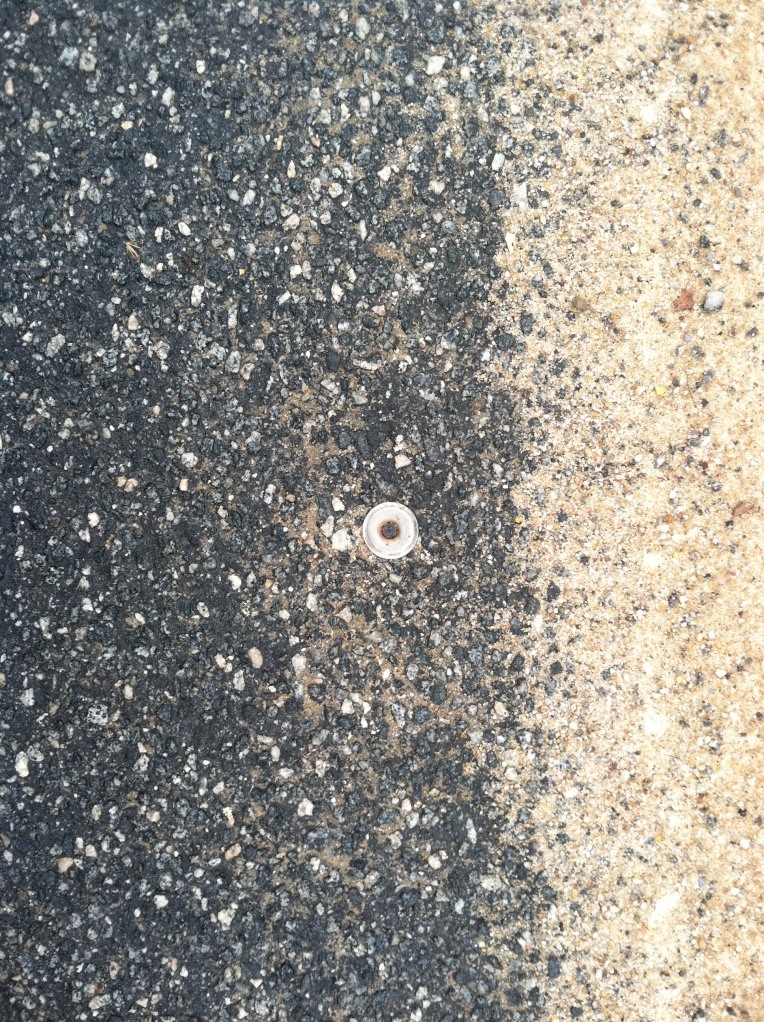 Roofing nails are very common. Rarely are they upside down and imbedded in the asphalt like the one above. More often than not, they are laying on their side …. or dangerously positioned on their head. The plastic cap on the nail helps keep it standing, point-side up … just waiting for an unsuspecting car to whizz over it.

Watching the roadside more carefully now, I see more than just nails waiting for a victim. I have wondered if larger hardware could injure a tire. Wouldn’t this guy make a substantial hole in a tire? 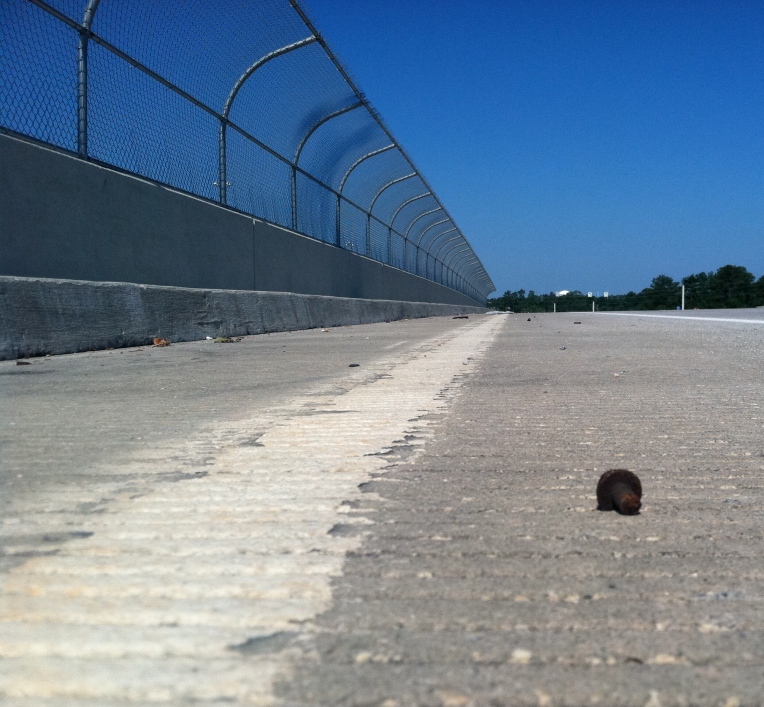 Like the busted knee I wrote about yesterday, these nails have made me think

Most days, we travel the highways oblivious to many dangers laying on the roadside. Without even realizing our demise, we cross some line into an area that others haven’t recently rolled and
our first action (the rolling, front tire) kicks up some nasty weapon
that the enemy uses to pierce us (our rear tire)
and there we suddenly find ourselves
limping along in life,
injured on the roadside,
unable to travel with the speed and agility that we were
only moments before.
Do you see that? Our OWN action has caused us injury  …
in the blink of an eye. 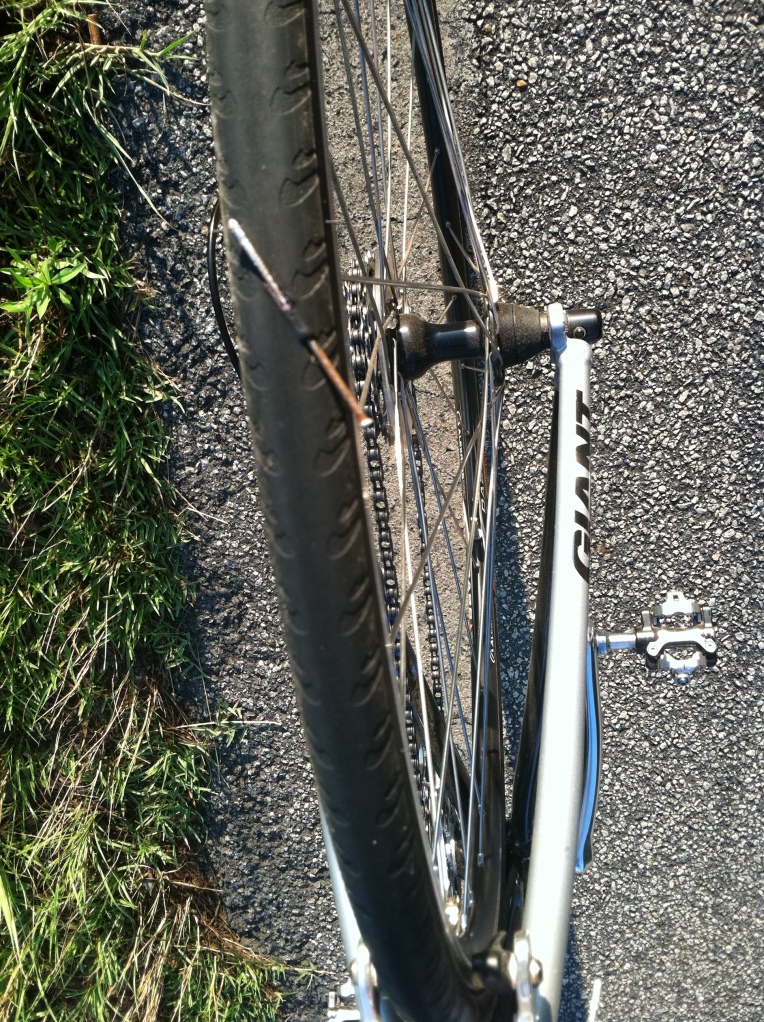 On a recent bike ride, I heard a click with every rotation of my rear tire. I immediately stopped to look back and see the culprit. What a surprise to see a nail, just beneath the skin of my super thin tire.
Ahhh…. and it was in my r.e.a.r tire!
I was well over thirty miles from my starting point. NO MORE than one inch wide, how in the world did that nail find its way into the slender circle of my tire? The rubber wall of the tire is very thin and the tire itself is inflated with great pressure. That nail COULD HAVE punctured my tire in a way to cause me to have a flat. Had I been traveling with much speed, I could have had a blow-out that caused me to lose my balance and fall. Had a car been coming at the right time, I might have been startled by the sound of the tire blowing and veered into the road. There are so many “what ifs.”

There are times that we roll along unscathed by the armament of the enemy.
God protects us and we keep moving about with speed and agility,
oblivious to the dangers around us.
There are times when we are able to keep mobile
because someone else has been attentive to remove a threat
before we even pass the danger zone.
But, there are times that
we are positioned properly to pick up a wound
and find ourselves mangled and broken.
No matter the situation,
God sees it all.
He may choose to show artillery to a stranger
who can remove it from your future path.
He may choose to show you the nail that has punctured your tire before you leave town.
He may allow you a full blow-out that causes a wreck.
No matter the situation, He is there.
He may allow sin to slow you down,
only to remind you of your weaknesses and need for Him.

Every day is an adventure
full of risk and strengthening.
Every day threatens us with a chance for injury.
And every day He offers to travel with us on the roads
scattered with the debris of sin.
Praise be to God.

5 thoughts on “Nails and Flat Tires”